“Phenomedia” is not a classic split-album, or a collection of mutual remixes, but a full fusion of both musical universes – resulting in completely exclusive tracks, going far ahead of anything you would expect. Influenced by Hint, Download, Clint Mansell, Foetus, Coil or The Downward Spiral, but mostly by the hypnotic power of mass media, Arco (Sonic Area’s mastermind) and vx “cheerleader” (PY singer and programmer) tried to break all stylistic boundaries and restrictions, in a merciless attempt to decipher the “Real World” or at least give some aural image of his morbid complexity. 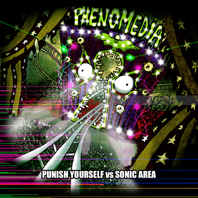